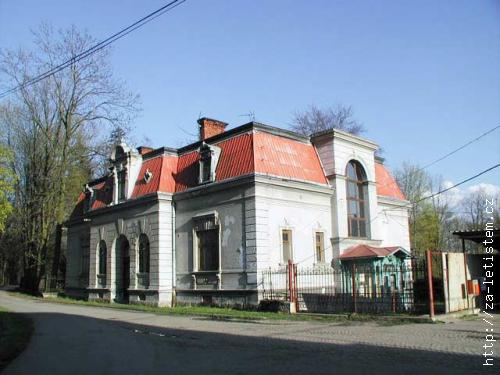 History of today's Lower mill, that was some time the biggest in Kravaře region, starts in 1692 when Rudolf Christoph, earl of Witten had north of the village at river Odra a new lords' mill built. Still in the same year this "New pond mill" was bought by Thomas Till (or Tiel?) from Nový Jičín for 300 golden rhines and milling duty for retainers. It already stayed in the property of the Till's family. In 1844 the mill was expanded by bakery and after two years there was installed steam engine with power of 25 k (about 18,4 kW), perhaps the first in the surroundings. Mounting operation in the mill required later reliable and efficient connection with station in Suchdol nad Odrou. The owner chose a possibility to build a narrow gauge railway with animal traffic. Railway with gauge of 710 mm was built in 1872 in the length of 4,05 km. It went out from the mill on the left side of road (present high-grown alley), it led to crossroad where it turned left (between present Little Birches and bus stop) in curve on the main bridge over the river Odra. After 50 m it crossed the street to Mankovice and went down under submersible bridge of the main railway in its km 229,9. It continued along it to district road at the crossing and along the street it led till to the goods shed in the station Suchdol. Hier coal and corn was reloaded for the mill. From the goods shed there was built 415 m long affiliated company for fish tins of firm Warhanek on the opposite side of the street in 1882. Maybe even branch to new stores of firm Till by the road originated at that time. For boiler house and bakery in the mill it was carried coal from Ostrava and cheap corn bought in Halič. From the mill a flour and bread was carried to the station. The narrow gauge railway used for all the freight biaxial low-wall type with body side plates, wheel-base 1,25 m, over-coupling length 3,9 m, weight of wagon under load of 2,5 tons. Presumably all the 24 pieces were produced by firm Schustala in Kopřivnice.

On the line the corn was taken into roomy stores and from them after surface cleaning into corn granaries. They were in 1891 significantly enlarged and consisted then of six large bodies, each of them could take 10 wags of corn. Final assortment happened in sorting machine, peeler, brushing machine, magnet machine and other.

The only milling was practised partly on cylindrical stands and partly by means of French miling stones. In addition to this also the bread bakery was year after year enlarged and modernized. Under the new owner Josef Till junior it was in 1883 installed new steam engine with power of 120 k; flat two-engine of the First machine-works of Brno. One year later generator for lightning and also telephone from mill to station in Suchdol accrued. In 1900 a power station for mill, narrow gauge railway and customers in the surroundings was built. In addition to the older dynamo 11,5 kW/110 Vss (else mentioned 450 V) he built 2x65 kW/500 Vss for track and for other users 2x220 V. Electricity was brought away from the mill on trolley line of narrow gauge railway to the crossroad by Odra from where a separate branch went to the village Jeseník and on narrow gauge trailway other one to station in Suchdol where it ended in big floating battery. From it went two branches with voltage of 220 V for station and Suchdol.

During electrification of narrow gauge trailway the route of railway was partly changed. Underpass under submersible bridge by river Odra was left and the new route went through the main route by vaulted underpass of local road in km 230,1. It got so out of the way of flooded territory and had here higher underpass height for trolley but disadvantageous acute curves and gradient. Trolley on vast route had height of 4 m over track and in underpass only 3 m. In "technical report" from 1900 it is mentioned also electric locomotive with weigh of 3 tons, axle base 0,86 m; length of 2,76 m with one electromotor of 15 k, speed limit 3 m/s (less than 11 km/hour). Witnesses mention in the last year of operation two various locomotives - small "freight" (probably the original one) and bigger "tramway".

The largest building object on the tract was bridge over the river Odra with three fields with total length of 24,5 m. Still in 1922 the owner of mill had new continuous conduit built (2x220 Vss) direct over Odra to village Mankovice but already with express notice that this region is determined for systematic and useful electrification. After building of power station in Třebovice in Ostrava in 1935 also a connecting conduit to Přerov was built and thereby the power station of mill Till became unnecessary.

In 1919 the mill could grind 30 tons of corn a day in a quality comparable to the best flour-milling products. Here produced bread was of excellent quality and was distributed by line to all the stations of the emperor track.

Combined operation of mill, bakery and power station was until 1930's successful and profitable. After interconnection of mill and surroundings to new electric power network the only narrow trail became short of supplying the power station in mill and in 1935 the electric running to Suchdol was stopped. The whole trail was disestablished and muded. Only in Suchdol a part of trolleys stayed and on the rest of yard a hand operation for fish-plant Warhanek was preserved until 1948. A transport for mill and bakery was replaced by automobiles.

The last owners of the mill Hugo and Herman Till did not succeed in hold it down alhough it was during electrification in 1935 modernized (e.g. extended of a small saw-mill). Sons of Josef Till junior reputedly did not have abilities of their father. Nowadays it is difficult to say to what extent the decline of mill was caused by change of business relations and transport bindings after desintegration of Austro-Hungarian monarchy. Something resulted from economic depression and useful electrification. In 1937 (or 1938) the last Tills' sold the mill, it is also said that the owner lost it in playing cards, and they moved to Vienna where their relations lived.

New owner of German nationality held the mill in operation and lost it as late as in 1945 during withdrawal. A quite number of keepers of the mill followed - Mills of Olomouc, Moravia-Silesian mills... The mill with its equipment from 1935 ground until 1982 when the buildings were destroyed and damaged by fire. Mill in its original size stopped existing and nowadays only smaller part of it is preserved. In 1982 the mill was bought by company DUMAT, s.r.o., nowadays public limited company.