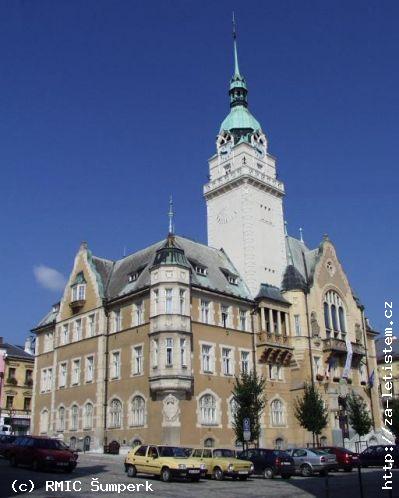 Šumperk was established as a town in the course of the 13th century in a feudal estate, most probably in connection with the mining of precious metals. The importance and excellent economic conditions of Šumperk are borne witness to by the settlement of the order of St. Dominic, which in the Middle Ages resided only in significant and economically very prosperous towns.
The town was more or less constantly in the hands of the most prominent houses of the Czech and Moravian nobility. In the 14th century this was the Lords of Lipá, in the 15th century there alternated in quick succession for examples the Lords of Kunštát, of Lobkovicz, of Valdštejn and of Cimburk. Šumperk occasionally returned to the direct holding of the landowner. This was the case in 1391, when the town gained significant rights from the Moravian margrave Jošta. The development of crafts ensured the main mileage right, 68 burghers were granted the right to brew and sell beer.

The occupation of the Hussite army around the year 1424 left the town without large-scale damage. Two guilds were founded in the course of the 15th century - the clothmakers' and linen weavers' guilds, which played a pivotal role in the further development of the town. Greater prosperity for Šumperk was prevented mainly by the fact that the pledge holders, almost without exception, did not reside in the town. The situation did not change with the arrival of the Tunkls of Brníčko at the end of the 15th century. Under their rule Šumperk witnessed two events, which had significant effects beyond the region itself. In 1490 a meeting took place within the walls of Šumperk castle of the leading figures of the Moravian nobility with representatives of the Silesian estates in order to discuss the question of support for the selection of Vladislav Jagellovský for the Czech throne. The second event to be written into the history books was the first ever uprising of serfs against the nobility within the Czech kingdom.

The Žerotíns, as successors of the Tunkls, obtained Šumperk into their permanent ownership in around 1505. At first this had a beneficial effect on the town. Šumperk prospered particularly under Peter of Žerotín. After the devastating fire of 1513, Žerotín had the monastery and church, as well as the dean's church rebuilt and commenced one of the largest construction projects in the history of the town - the building of stone ramparts. The prosperity of the town was reflected in the growing confidence of the burghers. After several years of endeavour they succeeded in taking advantage of the disagreements between the Žerotíns and in 1562 they bought out of the ruler's protectorate and secured their position of a free royal chamber town.

Despite large debts and several catastrophes which struck Šumperk (the plague epidemics in the years 1571-1572 and 1585, and the floods of 1591), the second half of the 16th century and the beginning of the 17th century witnessed one of the peaks of the town's development and prosperity. Wooden dwellings were increasingly often replaced by walled houses. The town had a water supply and sewerage system, and some streets were paved.

The promising development was disturbed after the events of the battle of the White Mountain (Bílá Hora). Due to its participation in the uprising of the estates Šumperk lost its previous position and became a so-called protected town of the Liechtensteins. The new owners included the town into the Ruda estate, where it remained until the mid 19th century. The 18th century saw an endless chain of tragedies for Šumperk. In 1733 Karel of Liechtenstein issued a definitive prohibition of evangelical religion and protestants were exiled from the town. Restoration of Catholicism met with several decades of strong resistance, initially also supported by the continuing Thirty Years' War. The burghers however gradually lost the illusion of liberation by anti-imperial armies.

The short period of development of Šumperk after the Thirty Years' War was interrupted by a fire which broke out on 7 May 1669 and within four days destroyed practically the entire town. The inhabitants had barely recovered when the town was struck by a further tragedy. In 1969 the witch trials spread from the Velké Losiny estate to Šumperk, claiming the lives of fifty prominent burghers of the town over a period of fifteen years. Amongst these was the Šumperk dean Kryštof Alois Lautner. Another devastating blow to the town was the plague epidemic which struck Šumperk in the years 1714-1715.
Šumperk was an important source of income for the Liechtensteins and as a result the town retained a range of privileges. Textile manufacture played a decisive role here. The most important role in the town was played by the linen weavers, who in 1708 succeeded in obtaining the privilege to manufacture special types of material - mezulan and fustian - from the emperor Josef I. The weavers were also able to manufacture damask, plush, velvet and eventually also corduroy. The main content of manufacture however was various types of trip, which were unparalleled in neighbouring countries and became a useful export product.

The end of the monopoly and the surviving ancient craft method brought the town to an economic crisis at the end of the 18th century. There occurred however a development in manufacturing. The greatest fame in this area belonged to Klapperoth's manufacture of corduroy, the first of its type within the Austrian empire and one of the first on the European mainland. In 1841 30% of all Moravian production of linen for foreign markets took place in Šumperk. One year later the first mechanical flax laundry in Moravia commenced operation here.
The industrial revolution meant above all a large population growth. The notable development of the town manifested itself also in construction. At the turn of the 19th and 20th centuries a range of grandiose public buildings and private residences, designed by the leading architects of the Austrian monarchy were established here. Šumperk was dubbed "little Vienna" for its constructions.

After the First World War the predominantly German population of Šumperk rejected the creation of the republic of Czechoslovakia and advocated a separate homeland, the so-called Sudetenland. The occupation of the town by the Czechoslovak army on 15th December 1918 ended this short episode. The inter-war development of the town saw the establishment of several new manufacturing branches. A greater development of the town was however stifled by the economic crisis, so the boom of the end of the 19th century was not matched.
The emphatically German character of the town changed after the Second World War, when the great majority of the town's population were forced out. The town's further development is however charted by the growth of the population, which by 1991 had almost doubled its pre-war size - to 30 422. Šumperk is the seat of the county municipal authority, which since 1960 has also administered the former county of Zábřeh and until 1995 also included the county of Jeseník.

THERE ARE ABOUT VILLAGE OR TOWN/CITY